A joint venture between Shell and Saudi Aramco, the Motiva Enterprises refinery in Port Arthur, Texas, is currently expanding to become the largest in America and one of the top ten in the world. As part of this project, approximately 53 new refinery modules are being assembled at Cianbro’s Modular Manufacturing Facility in Brewer, Maine, each requiring a vast amount of scaffolding to set all the various pipes and structural beams in place. With very little continuity in design, as each module is different from the next, there is only one-eighth of an inch margin for error as all structural, piping and functional elements have to fit precisely. The harsh winters in Maine add to the challenges of working outside at this scale. Finally, after each module is completed, they travel by barge from Maine, around the Florida coast and then west to Texas. Once arriving in Port Arthur, the modules are assembled together to form the refinery.

Our QES® scaffold system was chosen for its high levels of adaptability, which means different lengths and heights can be accommodated without interruption, and projected levels of productivity can be maintained. Scaffolding specifications for this vast and complex project have, to date, drawn on 90% of the component range. During winter assembly, some modules were wrapped in more scaffolding and plastic sheeting to provide shelter from the weather. The first four modules were shipped to Texas on 26th March 2009. This mega-project will increase the refinery’s current capacity of 275,000 barrels per day to more than 600,000 barrels per day. 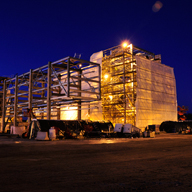